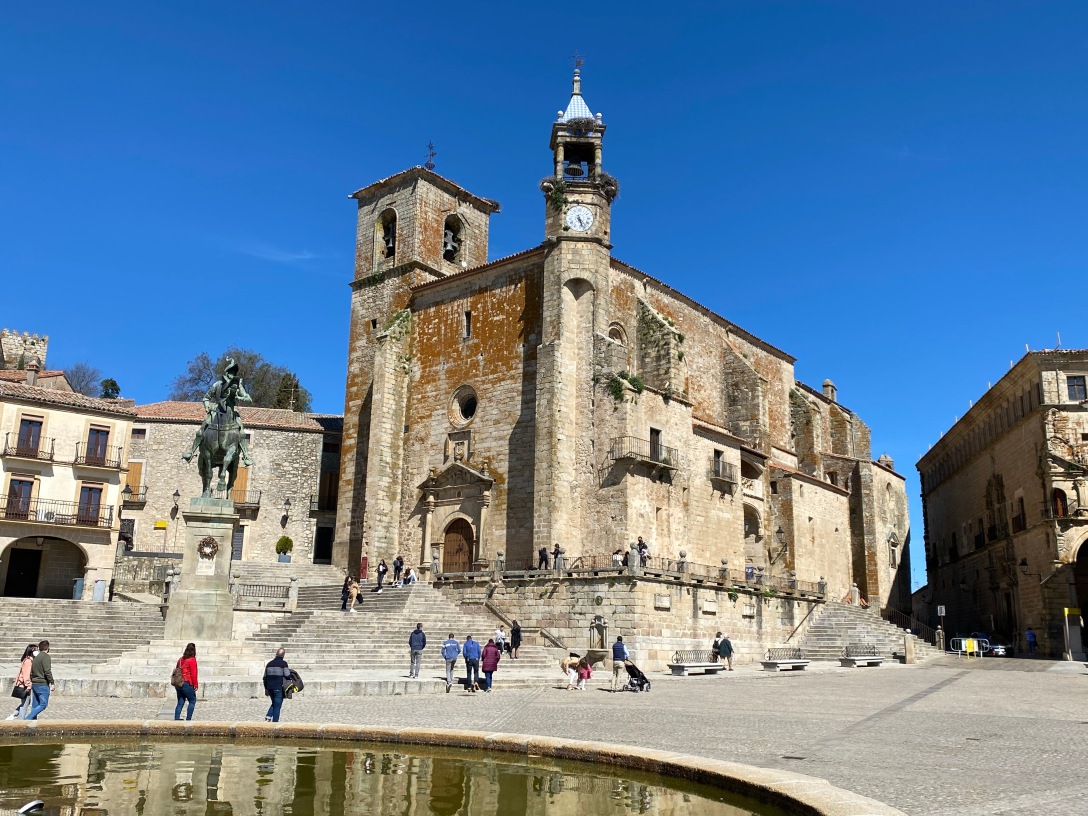 We left Sevilla and picked up Via de la Plata (The Silver Route). This is an ancient commerce and pilgrimage route running North to South through the west of Spain, modern days have extended it from Seville to Santiago de Compostela. Most of the drive in our first stage was high, on a reasonably featureless plateau but we arrived in Cáceres looking forward to an explore. A new region, Extremadura.

We camped at a relatively quiet site which unusually for us, had a disproportionate number of Brits. We cycled a rubble ‘path’ into the town, I gained my level 3, and our arrival was another delight as we entered the Plaza Mayor. Its a really small but beautiful medieval town, again very quiet but a few café restaurants open in the square so we had a super tapas lunch before heading within the old walls through a lovely old gateway, into the old parts. Cáceres, in normal times is very much likely to be on the “movie set trail” given it is pretty much unsullied by anything modern. Incredibly, a set designer would have very little to do other than remove a couple of signs off buildings to create a perfect medieval set. Naturally it has a disproportionately large cathedral, Catedral Santa Maria but inside it houses the most stunning carved wooded alter, an awe inspiring vaulted ceiling and enormous silver chandeliers. I hope the photos do it justice, zoom in if you can! We were tickled by the sign above the confessional, M. Iltre Sr. Penitenciario… Anyhow, it was great to be able to go in and see it, most are closed, including their highly photographed, baroque, San Francisco Javier church. Around the town are pieces of outdoor sculptures, and as became customary in this whole region, storks nesting high up wherever they could. Narrow streets abound, a beautifully low key Jewish quarter and, at the risk of repetition, gorgeous tiled buildings and balconies! It only needs a day here to take it in but its worth it.

Parque National de Monfragüe is approximately 70km north of Cáceres. Its a UNESCO reserve. It runs along the River Tagus and is home to two very large and long reservoirs surrounded by ancient woodland and numerous habitats. Long mountainous ridges and rock faces are perfect for the birds. Pena Falcon a highlight area. There are wild boar, red deer, numerous raptors (some endangered) and Lynx cats but the closest we got was in the toiletries aisle!

We parked up at the one nearby site (no Brits but lots of Spanish!) and headed out to the treks that go from the visitor centre. We had our first glimpses of Black Vultures soaring over our heads at the mirador, we were surprised at the interest they had in cheese butties? As we tend to find, we can spend a lot of time watching their glorious shapes as they enjoy the thermals. We took to pedal power in a different direction into the park along the reservoirs with glorious views across the wider landscapes from high points. We were treated to nesting Black Storks, which are rare to see, and more Black Vultures. A different cycle ride took us in the direction of the Monfragüe Castle mirador. Given a weekend it was busy with day trippers but with the spotting scope and the Christmas gizmo for the phone, we could really see the action on the rock faces, including the spectacle of mating Griffon Vultures (video available!) It is the season after all!

Approximately 90km East from the park, is a town called Trujillo, a day trip in the van. From the park, the route is across landscape akin to African planes, with goats instead of impala and pigs replacing wart hogs. Stunning long views in all directions on empty long straight roads, those Romans again eh! Trujillo, not surprisingly, has a bustling main square sitting below a majestic castle. Built to protect some of the trading routes between key cities. Sitting with a drink in the square was our first experience of tourism, selfies and tour guides but we did manage to get off the beaten track and avoid most. Castle selfies were a must have, though. The castle was a well preserved example, being the centre of a fortified community. Given the elements that remain, it was clear how the community would have lived. Medieval in the oldest parts outside the castle walls, it’s a lovely wander. One could be forgiven for thinking it could be renamed as Storksville, they were nesting everywhere and visibly stealing nesting materials from each other. There must be something in the air as we spotted another pair at it, in broad daylight atop a building on the main square.

Heading further North we pitched up overnight at a brilliant Aire but in an ugly town! We stayed next to the local football teams ground where we saw one of the players waiting for training to start (see pic) It was originally a bull ring! The town, Navaconcejo, did have a really unusual feature that we’d never seen. Somehow they manage to splice their pollarded trees together so they are a chain, this must look incredible when in leaf!. Anyhow a pit stop enroute to the Jerte Valley, an area to rival The Philosophers Walk in Kyoto when in full cherry blossom bloom. Driving through the valley with various stops, the valley sides were a very pale pink hue of blossom on trees, set upon terracing. A hike into Garganta de los Infiernos, took us to fairy pools, waterfall worn into the soft rocks over the years. A lovely walk took us to the top of the falls through lichen covered trees and blossom with spring flowers blooming, for our picnic stop.

Leaving this area where cherries are clearly their business, we took the long drive towards Salamanca. Every electricity pylon or tall structure had a stork nest on it. Not the most interesting of drives but Salamanca beckons. Jigsaw is fine by the way, she enjoys arguing with other cats and dogs, being out exploring the different surroundings, nearly ending up in the river at one point.