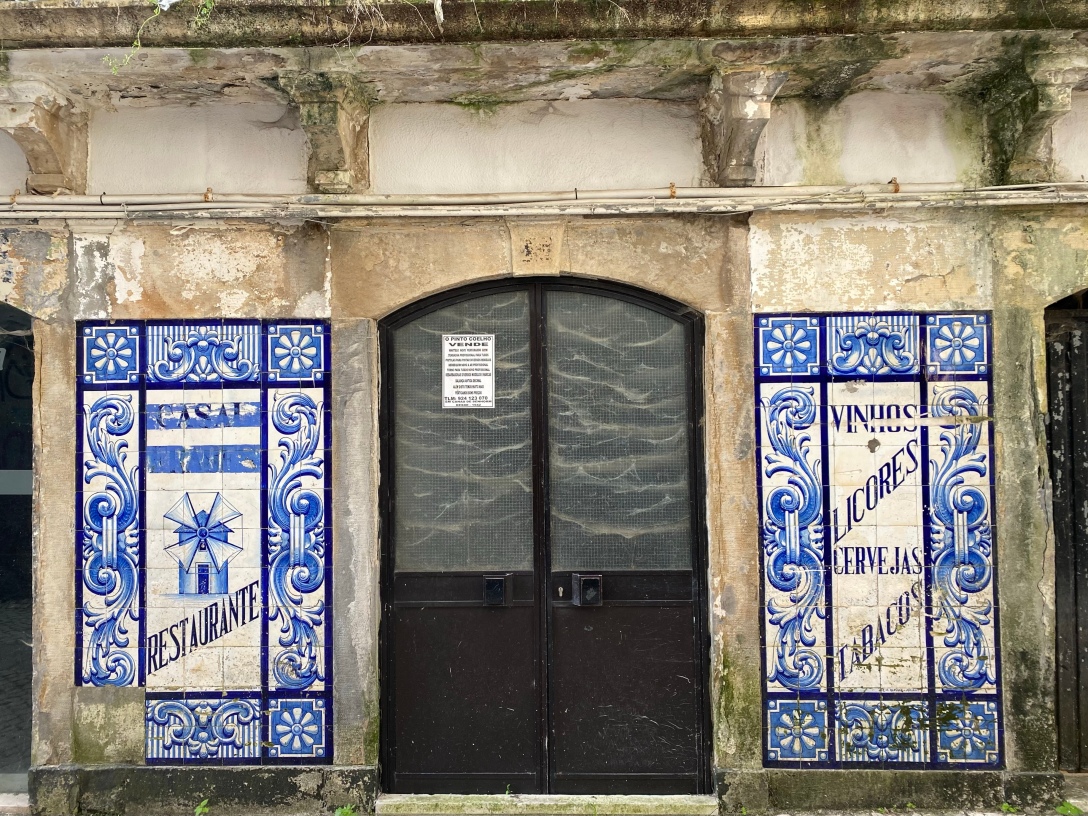 Once upon a time there was a Portuguese chap called Alfonso Rodriquez Tiley, he was a wonder with ceramics and through his short but troubled life he created, the ’tile’. After his fateful demise as a result of the Portuguese Inquisition, many of his followers, he was a popular guy and well travelled, decided to tile their homes and buildings in his honour, and it stuck….. 😉

Driving into Portugal there were a few obvious indicators that we’d left Spain, the roads for one were far worse, tiny towns and villages that we passed seemed even quieter and more run down and there were pops of colourful tiling everywhere adding some brightness through the drizzle. There were also, a lot of aqueducts, the first we saw was in a small town called Serpa, built in C11th on top of a medieval castle, it seemed incredibly delicate for the purpose it bore. Some parts of the castle, as a result of an accidental blowing up of a powder keg, lay in precarious positions, leaning against castle walls, and the entrance to the visitor centre… Lovely old town to wander around though, plenty of tiny inner wall houses in varying states of repair before heading on although it seemed very tired, shops waiting for tourists perhaps, and generally somewhere needing some love. Maybe it could come from the person who finds joy in the roof terrace.

Evora is a popular spot, the aire was full and the campsite heading that way too. One of the big attractions is The Chapel of Bones. Built in late C16th by Franciscan monks who supposedly relocated 5000 bodies from cemeteries where the land was being re purposed (due to its value!) Deciding to put them on display to remind people not to focus on material things when in the presence of death, it was one hell of an art project. The pictures tell the story. The sonnet is indeed, thought provoking.

Next door, a museum displaying over 400 Nativity scenes from around the world was incredible. All part of the private ‘Canha da Silva Collection’ many were from the wider Lisbon area but they all differed, some looked like Grayson Perry creations, others were very traditional, and there was everything in between, but they all delivered the universal message of love and peace and humility that emerges from the nativity scene.

The Church of São Francisco was the first in Portugal. Externally, Gothic and Baroque it was very different to those in Spain internally, we found the austere stonework was less fanciful, walking through, until at the alter, looking left, were their Semana Santa statues and a majestic in size, 3D alter carving, with so much gilt it shone. There were several small chapels, Alfonso’s tiling on display. Seriously, it was the start of ornate works of tile art, aged, delicate and glorious.

After a wander around the gardens of Palacio de Dom Manual I, watching the peacocks strut and flirt, we found the Roman Baths… yes they took some finding as they were inside the Town Hall. The glass roof was impressive! The towering Temple of Diana was easier to spot. Generally its a great wander, and yes, it has an aqueduct too. The Graça church down a narrow side road, eye catchingly ornate and now used by the military as offices!

Evora Cathedral is a vast complex, lots of marble was used which doesn’t weather like stone, we noted this as one of the areas we strolled was the roof. Yes, a tad precarious with, a surprising for us Brits, lack of safety focus at all. The sign might as well have said ‘it’s your fault if you fall off’. Internally the Cathedral has lots of Polychrome stone and very rare, wooden organ pipes. Very Baroque and ornate, it was colourful to say the least. Never seen before, we spotted the door with a ‘Hooked version of the Christian Cross’, symbolic for Christ’s victory over death, sadly now only known for being the Swastika.

Needing some green and rural space, we found some great riding at National Park Sierra Mamede. Cycling over the mountains on the tracks, picking up two punctures given the type of terrain, we explored Castelo de Vide and Marvão. Both small towns, high up with quaint old castle homes within the walls. One castle had a fantastic exhibition to The Carnation Revolution in Portugal which was so insightful and once again, we felt history ignorant. We do tell ourselves that doing what we are doing is certainly broadening our minds, at least! The views from both places were spectacular, even if overcast and these small towns always have interesting little features to find.

The reach of The Knights Templar was global, we’ve seen several references in other places on our travels. In Tomar however, a relatively small town, is The Convento de Cristo. It is the main event for the town, sitting above, the vast building was built by Gualdim de Pais, the 4th Grand Master of Knights Templar in Portugal, commencing in late C12th. It is a UNESCO historic jewel, back to when Portugal was expanding overseas with trade in C15th under Henry the Navigator (great name eh?!) It was the HQ at that time, as Tomar became highly successful, built on industry and commerce. Anyhow, the building is phenomenal and certainly reflects the wealth at the time and the power held. On the darker side, Tomar also houses one of only two surviving pre expulsion, medieval Synagogues in Portugal, used until 1496.

On a light note, the main festival in the town is Festa dos Tabuleiros (Trays) where the tradition is for women to walk around the town carrying trays of bread on their heads, decorated with flowers and a crown! Next one is July 2023. Tomar is a really nice town to wander around, clearly gets tourists given the Tuk Tuk Tours. It reminded us of the weir area in Bath but less people and was very picturesque. It too has an amazing aqueduct, built to provide water to the Convento de Cristo. It’s amazing the structures built to carry what’s a relatively small amount of water flow!

Hola! Me llamo Jigsaw, tengo cinco anos y soy un gato viajero! Hablo dos idiomas ahora! In Engligh, it has been brought to my pawrents attention that they don’t talk about me much so i thought I’d best correct it. I really don’t know why, but they forget about me at times when pawing away at the keyboard. I try and make my point by sitting on it but to no avail or tail. I find being on the move quite relaxing, the tall one has long legs for me to chill out on. I have been really well behaved, even when they stay in carparks with no grass or when they leave me for hours on end in the tin. To be honest, and don’t tell them, I quite like the peace and quiet, the tall one is always chattering away and he’s no singing voice. On the odd occasion I hide under other peoples mats, not sure how they find me! The feeder one is easily manipulated, I’ve worked out that if I pay her attention I get a reward! Wowzers Meowzers! The tall one has come in handy when I get stuck up trees. I’ve not been very successful on the hunter gatherer side of things, as frankly, I don’t need to be. The weather hasn’t really been to my liking anyhow. Anyhow, I promise to be more vocal in future but here’s some pics to keep you going, the tall one takes a lot of me you know, he’s so mushy about me cos I’m so beautiful 🙂