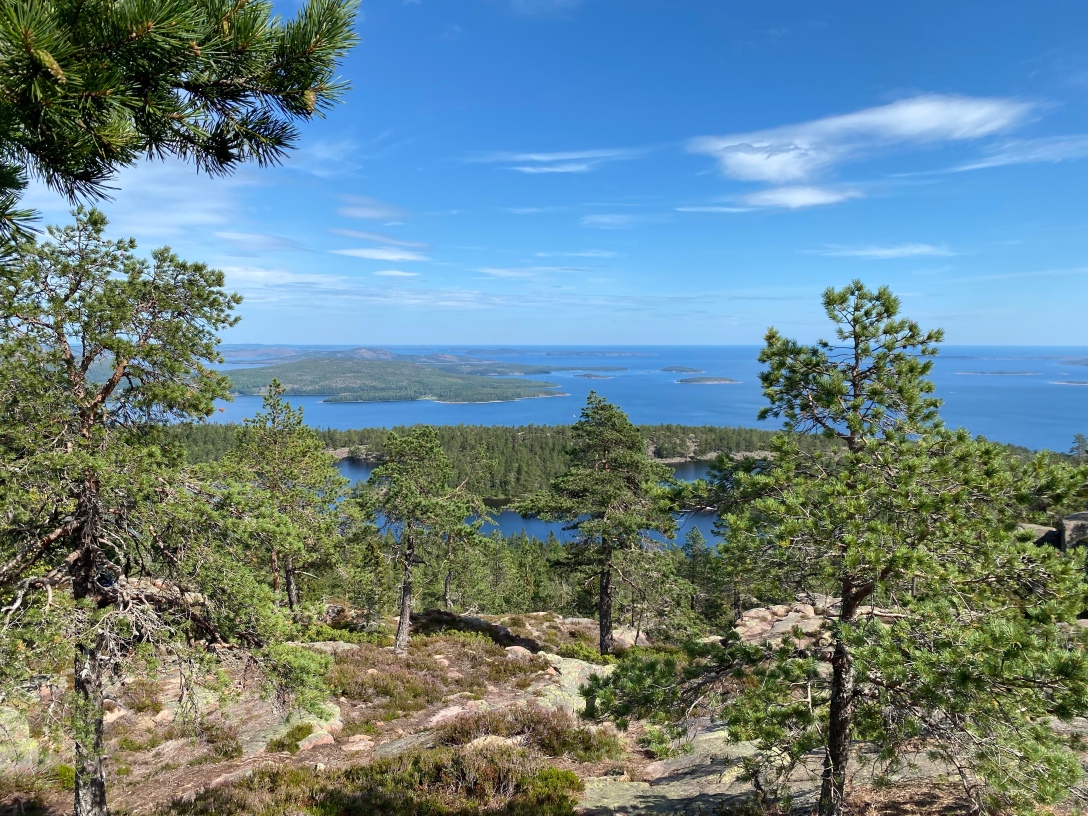 After the highlights of Stockholm we needed to tone it down a bit so after escaping the tunnels, we headed to Uppsala for some crazy golf, not kidding, see photo… then we decided we should be more serious so headed out for a riverside walk to be educated on Uppsala, it being a university town after all. Compact and quiet it’s full of grand university buildings as usual, dominating the tiny historic C18th houses towards the centre. We were on the look out for quirks, as we do, and found another cat sign, see below. It is close to the Uni Library, said to hold 5m books, the largest collection in the Nordics. Reason for the cat you wonder? It celebrates a popular children’s book series, set in Uppsala “Pelle Svanslos” (Peter no tail) Pelle is a kind hearted cat who works hard, is generous and thoughtful and studied for his degree at Uppsala, in mousing…?!! Jigsaw has a 1st class one of those we have discovered 🙂 Selection of pics at the end!

We also came across the usual outdoor art creations, amazing what can be created by river dumped bikes and thankfully the gold man lying down had a life ring to hide his modesty. Their bikes racks at the station too, are a fabulous creation in dense storage. In the smart new foodhall (every town seems to need one these days) we found cat chocolate, very cutsie! We also found rune stones, oddly, at the side of the Cathedral.

The highlight for us however, was the Domkyrkan Cathedral, the largest in the Nordics. Outside, its gothic towers and red brick appearance belied the splendour of the interior. Painted walls and ceilings, creating textures and forms that gave the appearance of tapestry. Small chapels lined the edges, different styles and themes at each and as we wandered around, the quiet medieval choral music of the boys choir delicately punctuated the silence. Dedicated to the choir’s 100 years was a ‘light wave sounds works’ installation, don’t ask me how it works but it involved water in shallow bowls and sound waves rippling on the surfaces.

On leaving Uppsala we spotted yet another American classic car. This ‘hot rod’ was immaculate, can’t say as much for the caravan we saw it towing! There are more Classic American Cars around Sweden than we saw in Cuba, never seen so many on the roads here, must be quite a thing to keep and restore them. The other big deal in Uppsala was Nick finding ‘Labneh’ while we did our supermarket top up. Anyone with an Otto Lenghi book will know he uses it in many recipes but it is impossible to find, even in Waitrose! It’s delicious, but I’m having to stay firm with Nick, we are not driving back via there, just to pick up more jars on the way back 🙂

Hudiksvall is on the coast of The Gulf of Bothnia, a body of water at the top end of the Baltic Sea. It’s a small but popular holiday spot but also close to a nature reserve which sits on a beautiful peninsula. Time for some exercise, we cycled 40km out to a tiny lighthouse on the peninsula past Holicks. Naturally there being so many small islands dotted around the archipelago, there are many of them. Having to also ride 40 km back we diverted into town for a drink, unusual place with its old phone box and a real mix of old and new buildings. Some on stilts in the marina but then ugly 70’s builds next door. The old one in the picture dating to 1893. We decided the following day to drive out to the nature reserve and ride from there. It was cooler riding the woodlands trails, hearing the birds and looking for a loose moose (none spotted). Even within a relatively small area, the landscape is constantly changing at ground level within the trees, wild meadows, ferns and rock deposits. Crossing a small bridge we went onto Kuggorarna Island, a car free space, quaint original fishing housing, with a frozen in time feeling, but in a positive way. We found a labyrinth, legend suggests it was created by fishermen to capture winds. We wondered if the man sized nets were to catch swimmers?! The tiny island church was a lovely surprise, not expecting the key hanging outside to be the real deal, it opened the doors to a magical little space.

Moving North along the coastline the landscape changes dramatically, becoming what is known as The High Coast, “Hoga Kusten”. This area is mountainous and is said to be rising by 8mm p.a. Inshore it is a mass of lakes and offshore there’s a mass of wooded islands. We were in Skuleskogens National Park, well known for Slattdalaakrevan, a serious rock crevice with views at the top over the coastline. A fabulous hike through woodland with birdsong and the light flutter of birch leaves in the wind for company, followed by boulder climbing, tree root tripping and all kinds of challenges and we were there. One of our better lunch spots! We still cannot fathom why people make the effort to get to such a gorgeous place then look down at their phones, not up! The whole area is breathtakingly beautiful and worth the couple of days we spent there. The water wasn’t too cold either!

Chasing more quirk, we had read about a place called Mannaminne when in Stockholm. Legend has it, there was a ghost train on the Metro, transpires its a semi truth. It was a proof of concept train that was never painted green unlike all the other new ones and was used as a back up only, travelling back to the ‘ghost station’ empty without stopping anywhere. Sightings being rare it was a recipe for a ghost story. Anyhow, it was rescued from being scrapped by Anders Abergs, an artist, who moved it to his ‘Art Park’.. we had to go! The “Silverpilen” was waiting! It’s the silver one in the photos!

We really struggled to find the words to describe the place. Swedish ‘artist’ Anders Abergs seemed to have a penchant for rescuing ‘stuff’ from around the world and then building around it, such as the Accordion House, built around an entertainment boat, the S/S Stromkarlen, frequented by Accordion players. The area was shrubland until 1980 when Anders started his project. There are now several museum buildings, themed differently. He also collected old tram cars, cars, boats and a fighter jet. Each of the buildings housed an eclectic collection; agriculture; engineering; fishing; the globe; Estonia; country music and our favourite “the Technology” house. Only our favourite as we could pick out lap tops and mobile phones that we’d once had, or ‘MS wordperfect’… we felt like we were becoming history ourselves 🙂 All in all it was a quirky and odd mix of functional art, a collection of some genuine pieces and several buildings full of all kinds. Dotted around outside were trams, cars and life rafts and a metal double bass… Maybe the photo’s will describe it better than my words!

Anyhow, from a basement to higher ground, the wilderness beckons!

Jigsaw is loving Sweden, the outdoor spaces, the tree’s to climb, the bushes to stare at and the mice to catch. Having caught three in one day recently we did wonder if Swedish mice are blind? Anyhow, she’s happy and healthy and becoming a well adjusted teenager! She’s been learning to play cats cradle too… pest!

3 thoughts on “Escaping to Higher Ground”